Things to Do at Homer Watson Park

Stand on the bluff at Homer Watson Park and look down the steep slope carved by the Grand River. The bluff’s sediments were deposited at the end of the last ice-age. The oldest deposits at the base are 17-20 thousand years old and were laid down under a thick ice sheet that extended south into the United States. The youngest sediments at the top date from 13.5 thousand years ago and were deposited at the edge of the retreating ice sheet. You can find more detail about this here. 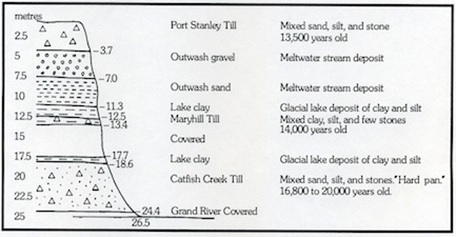 Do You Hear the Spring Warblers?

The bluff above the Grand River is a great place for colourful spring birds. They include small warblers that prey on insects. Each warbler species feeds in a different part of a tree (It’s like different kinds of consumers shopping in different stores). Here are two spring warblers that you are likely to see on Hemlock trees – Or, rather, you’ll HEAR them. See if you recognize any of the bird songs on the “all about birds” website:

Back to main page 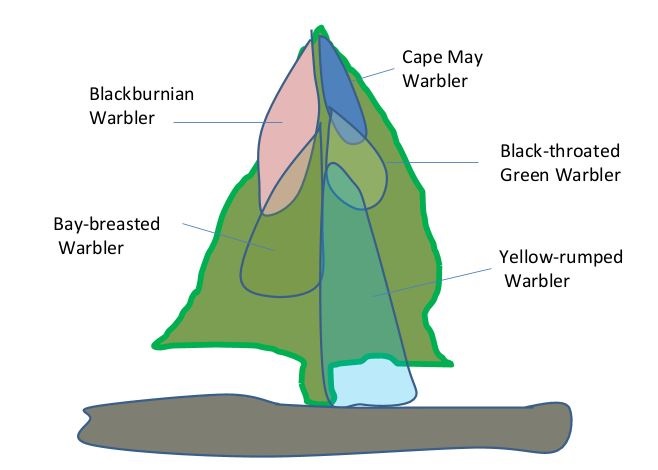 Low Flow in the Grand

The Grand River often floods in spring with melt water, but in summer and autumn it usually has relatively little water.

When the European settlers cleared over 80% of this watershed’s forest, water rushed off the land much faster after storms, and snow melt came quicker in spring. There were more floods. People were also living on the flood plain in the way of floods.

Draining wetlands made things worse. Wetlands are like sponges that absorb melt-water and let it drain away slowly.

After European settlement there was less water in the river in summer: So much had drained away each spring. In spring there were bigger floods.

Modern farmers tile-drain poorly-drained land to increase crop yields, but this, too, speeds the flow into the rivers, adding to the flood and low-flow problems.

Our cities and villages make matters more difficult – After rain and snow, water speeds off roofs, car parks and roads. It cannot drain into the ground.

The Grand River Conservation Authority has built dams upstream from here to keep spring floodwater back and thus to reduce floods. This stored water is released in summer to increase river flow.

The Grand River supplies cities like Kitchener and Brantford with water. You can see a weir upstream from here where KItchener gets some of its water.

Do what you can to help water management in the watershed. For more information see our home-grown water and energy efficiency people: REEP. You can install a rain barrel, follow lawn watering regulations, and not waste water through leaky taps and pipes. Please don’t tip motor oil or other contaminants down street drains – You may have to drink it later! 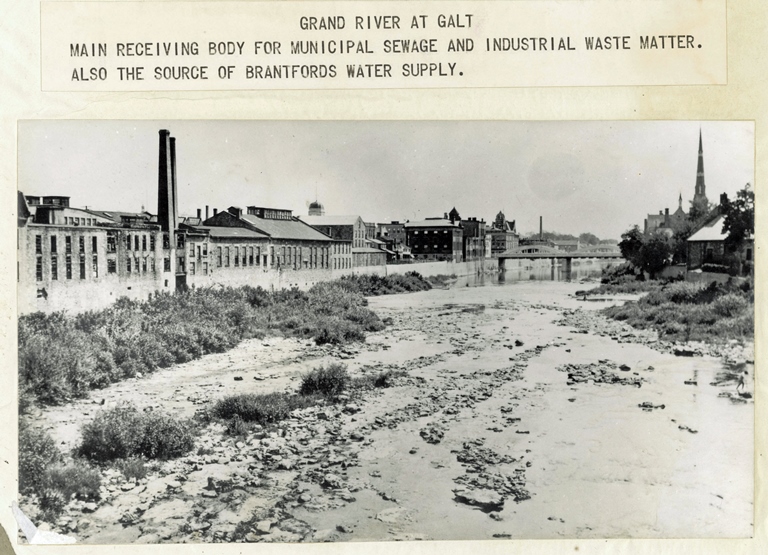 The Grand River in Galt (Cambridge) during a 1930s summer drought.

Every year American Robins come north to breed in Canada and the northern USA. The largest of North American thrushes, they are very common. Robins mainly eat worms, insects and fruit.

A robin pair will raise two or even three broods of three to five youngsters, and now they are returning south. In the unlikely event that they all survive the summer, there might be up to 17 robins by fall!

Robins migrate at night and feed up during the day. When the weather is right, you’ll find the morning woods and gardens newly filled with robins hungry for breakfast.

Some robins over-winter here in Waterloo region, provided that they find enough food.

Most of these robins will die before they return to breed again. Just imagine a world where that didn’t happen. We’d be knee deep in robins in no time at all!

And about robin migration. 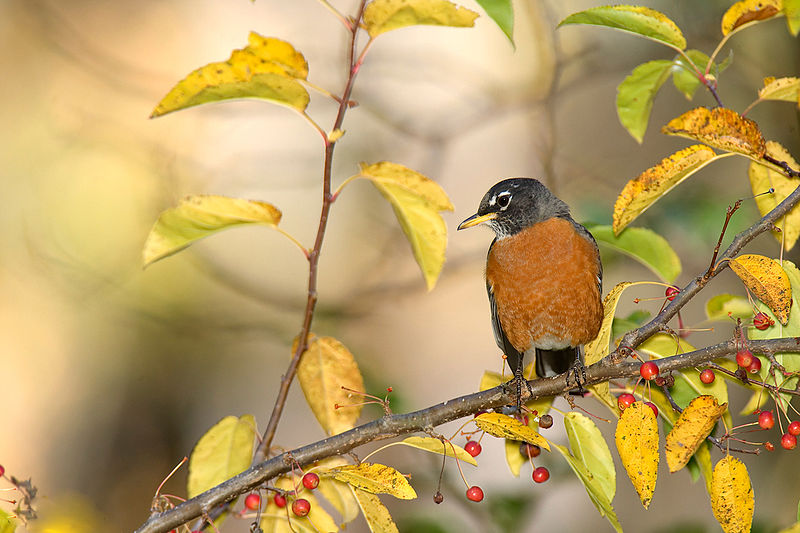 All Year
All Year

Eastern Hemlock is one of Ontario’s most beautiful trees. Visit Homer Watson Park’s hemlocks just after a snowfall and you’re in for a visual treat!

Hemlock is a potentially large tree that can live up to 800 years. The trees have sweeping boughs that hang low, a furrowed bark, and small cones.

Hemlock is common in southern Ontario forests but was once much more dominant. It was decimated in the 19th century by logging for railway ties and Hemlock bark was used in tanning animal hides. The tanneries of downtown Kitchener’s Tannery District used quantities of hemlock bark. 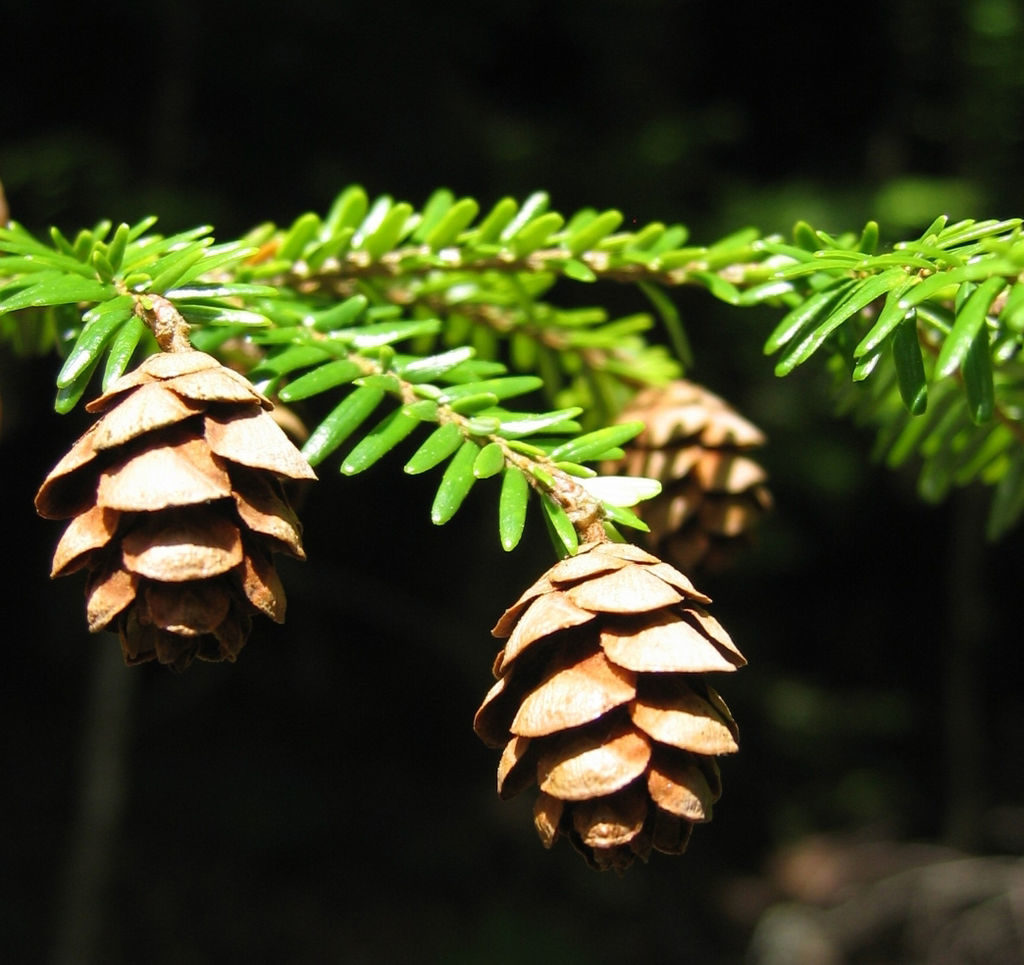 Photo credits: Wikimedia.org
Back to the main page for this Ecopost
Scroll Up