Things to Do in Downtown Galt

Things to Do in Galt

The doves that you see in this area are likely to be the Rock Pigeon (Columba livia) whose native range is from India to Spain. In the wild they nest on sea and mountain cliffs but hey have adapted well to city buildings. These handsome pigeons occur in various colour combinations but usually with two dark wing bands. This is the same species as the carrier pigeons that were once so important in carrying express military messages. The Rock Pigeon is now common, and often a pest, in cities around the world as well as near any grain elevator.

Don’t overlook these cheeky urban dwellers. Even if they are a nuisance for home and business owners, they have interesting behaviours. Watch closely as you enjoy your coffee or lunch!Look out for:

Head bobbing. Pigeons’ eyes are at the side of their heads – good for spotting potential predators, but poor for judging distance. When they move their eyes up and down those bobble-heads are getting a fix on you and your sandwich!

Chilling out and warming up. Pigeons will rest where they can get most relief from heat or cold. Watch how they choose different perches on different days, depending on the weather.

Pairing up. Pigeons tend to mate for life. When a male courts a female he will prance around her, bowing and spreading his feathers. If she likes him they will put their bills together in a “kiss”.

The American Ruby-spot is a distinctive damsel fly (a small dragon fly). You’ll recognize it by its red wing bases. It is here along the Grand River in Galt because it likes wide, open rivers.

You can tell the males and females apart. Males have a lustrous red head and thorax whereas the females’ thoraxes are green or copper coloured (The body is divided into a head, a “chest” called a thorax and a long, thin abdomen).

Males defend a territory. Can you work out what is the territory of each male in this area? An intruding male will trigger a flying “dogfight” in ever widening circles.

If you see two damselflies flying in a “cartwheel” formation, they are mating. The tandem pair will fly to floating vegetation where the female will deposit fertilized eggs. These hatch into an immature “nymph” that lives in the river, hunting small creatures. When it is grown next spring, it will emerge on land and split open its skin to reveal a new adult.

The American Ruby-spot is widely distributed: from Ontario, Quebec and the Maritimes all the way to Mexico. In southern Ontario it can be seen flying at any time from July to the end of September. 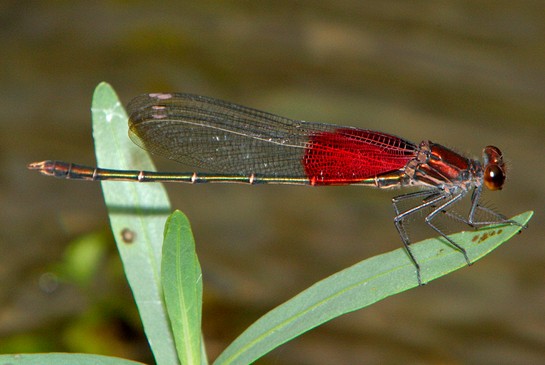 Abbott, J.C. 2006-2016. OdonataCentral: An online resource for the distribution and identification of Odonata. http://www.odonatacentral.org

EcoPost 2.2 – Chill out and watch Swifts at Work!

The Chimney Swifts look a little like swallows but are in a different bird family. However, like swallows, they feed on flying insects and are migratory, arriving in May from NE South America. They breed right here. Swifts fly south during September.

Swifts roost in colonies, and in Ontario most of these are in old industrial and institutional buildings. The birds rarely land except to attend their nests. As they are supremely adapted to continuous flight, they cannot perch like other birds. They have to cling to vertical surfaces. As old buildings are demolished and chimneys are replaced with modern flues, there are fewer and fewer places where swifts can breed and roost.

Like most birds specialising in flying insects, swifts find it harder and harder to gather food. They share this problem with many bats. The complex of reasons for these population declines include habitat change and increasing effectiveness of insecticides.

Swifts and other aerial feeding species are declining throughout North America. What would downtown Cambridge be like without swifts? No doubt we could survive without them, but what a tragedy to lose these iconic birds that we can all enjoy right here in town!

Swifts swoop around a roost such as a chimney at dusk, often in large numbers. Then they all fly into the roost in less that a minute – A spectacular and very brief disappearing act. Don’t miss it!

We feature the swifts that fly around the Grand River in downtown Galt during the day (EcoPost 2.1) as well as those roosting and breeding at the old Dickson School on Cant Avenue (EcoPost 2.2). At Dickson School, look for these birds at dusk, especially from early May to early June. Some of these birds breed in the two chimneys at the school building, while others move out to breed elsewhere. Though swifts have used the building as a fall roost (August onwards), they may no longer do so. Swifts in Galt usually leave by mid-September and in 2016 they were all gone very early in that month. 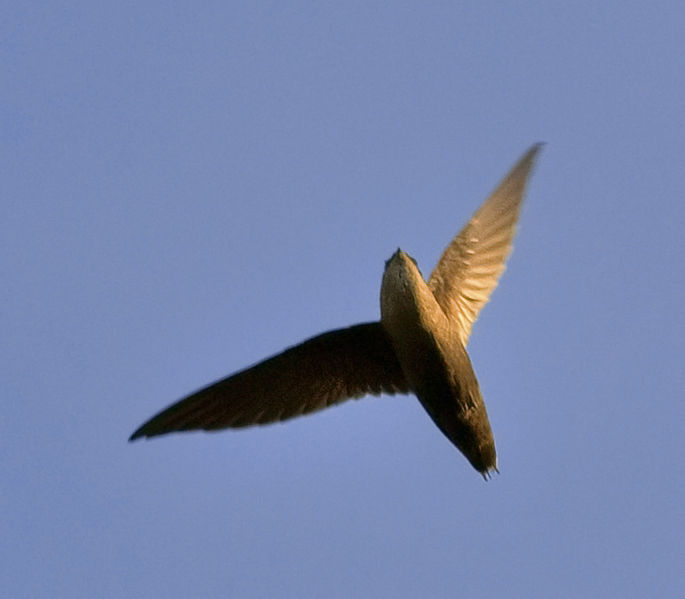 Back to the main page for this Ecopost
Scroll Up